Té House of Tea was founded in 2005 by Connie Lacobie, with an international cast of friends that all volunteered together at Ten Thousand Villages Houston, including Irish-born Alyson Bell and Indian-born Hema Parikh. They fused together their love of tea with food recipes from around the world, and adventured with a booth at the Houston International Festival, selling teas and their fresh-made masala chai.  The featured country that year was India, so their booth was located with all the other Indian food vendors, and their chai was an instant hit with festival goers, Indian and American alike.

With the initial success behind her, Connie set out in earnest to find a store front for her teas and international food selections.  Her goal was to create a community centered around tea, focused on health and the culture of drinking tea, and supporting small estate and Fair Trade-certified teas. She finally settled on a spot in the Montrose area, and on March 4, 2006, her new shop first opened for business at 1927 Fairview.  The first few months the shop was open from 7 am to 6 pm, but Connie and staff quickly learned the tempo of the Montrose area, and the store hours shifted to later in the evening.  In addition to over 130 teas, food selections started to diversify as well, as Connie added more flavors from her home country of Hong Kong, and the menu emphasized gluten-free, vegan, and vegetarian dishes. 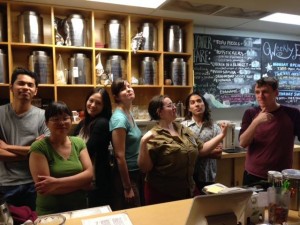 Té House of Tea rapidly gained a diverse following, and a popular spot for studying, small meetings among friends, meetups, book clubs, and other gatherings.  Then, various unexpected happenings emerged – a customer asked if he could start a tango milonga at Té, which led to 5+ years of a weekly Friday evening tango dance. Watching that emerge, another customer suggested a swing dance as well, which led to the Saturday night Fusion Swing dance.  This ran for 8 years, and was going strong even up to Té’s closing.  A musically-included employee decided to start an Open Mic, which lead to our Monday night Open Mic – a truly open mic where local musicians, poets, and spoken word artists would meet to showcase their talents and entertain customers. Another employee decided to foster interest in cartoons and animation movies, which led to the twice-monthly Thursday Animation Movie Nights.

Té has been host to numerous fundraisers, supporting Veterans for Peace, disaster relief efforts in Japan, Philippines, and Thailand. Bridal showers, baby showers, birthday parties and graduations, even a wedding, have all been held at Té. Many a first date has happened at our place, couples meeting first over tea and maybe a light snack, then spending hours in conversation on one of our comfy sofas.  We have met many of these couples later, now married – a few have even brought in their babies, acknowledging Té as where it all started.

Connie set to create a community location, not just a cafe.  She was pleased to see it turn out as she had envisioned, even more so. Unfortunately, the food business is also hard work, and a few years ago, Connie started experiencing more issues with her joints, from the rigor of standing all day at work. She didn’t want to admit it, but some signs of aging were creeping in.  In 2015, she set out to sell the place, but alas the right kind of buyer did not emerge, so on December 24, 2015, the shop at 1927 Fairview closed for good.

We still remain online today, selling our bulk teas, and are working on a plan to bottle our famous masala chai.  Keep in touch, we’ll let you know how we progress!